MULFORD PLASTICS LOGO
Mulford approached us to initially make amendments to their existing logo. We recommended a new approach and presented a number of options which were reviewed and a decision was made that they pursue a new look and feel. The decision was made to totally re-design their logo and we came up with this helix-design resembling plastic in its purest form – a liquid that hardens to form a flexible and transformable product. This logo was then adapted to form a corporate styleguide which detailed the acceptable uses for the “Mulford” brand. 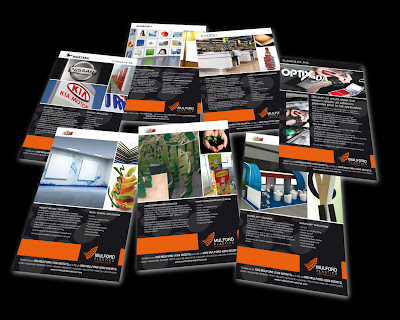 MULFORD PLASTICS PRODUCT FLYERS
A new look and feel was produced for the entire Mulford Plastics range according to their corporate styleguide. These product flyers are produced and exhibited at trade shows around the world.
Posted by Catapult Advertising at 4:19 PM

Catapult Advertising
“We’re in business to add value to your business” Catapult is a creative ideas group with over 25 years industry experience offering innovative design solutions that generate consumer response. We are results driven. We make things happen.